This is going to be a Let's Play of a romhack of Fire Emblem: The Sacred Stones called Monster Quest, in which (most of) the player's units are converted to various monster units.

I acquired the patch for it here. If you want to play it yourself, you'll need an account on Serenes Forest so you can download the patch, a clean copy of Sacred Stones, and something like Lunar IPS to apply the patch.

I will be largely glossing over the story. As far as I can tell, the hack doesn't change it, and there is already a perfectly well-done Let's Play of the original game on the Let's Play Archive that covers everything there, plot-wise. 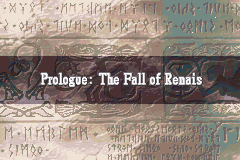 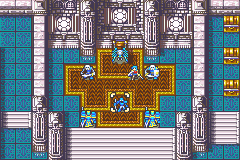 I grabbed this screencap because King Fado the Elder Bael surprised and intrigued me. Is Gilliam going to be a Bael? Admittedly, no monster exists that is slow and heavily armored, with only the Cyclops coming close... but going from "slow and bad at navigating terrain" to "reasonable speed and able to cross mountains" is a big change!

The Bonewalker on the left puzzled me at first, as well, and finally caused me to realize that Franz is in the scene. Somehow this had always eluded me in playing the regular game.

Anyway, we're under attack by our friends, Grado, so it's time for Seth to carry Eirika off on his bony shoulders. I'm hoping Eirika is actually a monster, and just has her regular field icon for technical reasons. 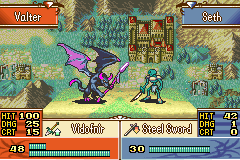 I actually didn't realize Valter was a Deathgoyle until the battle started. The two Wyvern Riders accompanying him were unchanged, and so I didn't pay close attention to Valter's field graphic. I'm surprised that it's not just player characters being turned into monsters by the hack.

Both units look good, which surprises me. I especially like Seth the moldy skeleton, Valter looks a bit funky, and I'm a little surprised they didn't make him more red, given his blood obsession, but I was honestly expected either unmodified battle sprites or messed-up ones.

Regardless, this plays out as normal -Valter hits Seth for a grievous injury, Seth doesn't even land his blow, and then Seth runs away with Franz, still giving Eirika a piggyback ride. 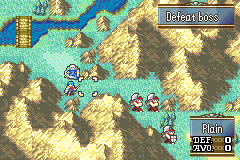 So here we are with our first mission, and things are largely unchanged for the moment. Seth gives Eirika a Rapier as usual... is Eirika going to be a Bonewalker in battle? 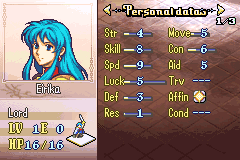 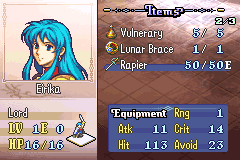 Eirika's stats and starting gear. Notably, the Rapier and Vulnerary's uses have both been increased, and Eirika starts with the Lunar Brace equipped -I already read the readme of the patch, so I'm only a little surprised. The readme indicates that Eirika and Ephraim's promotions have been altered, and the plot-promotion does it incorrectly. Interestingly, even though Eirika is level 1, I can use the Lunar Brace this very instant. I guess that makes sense, since it's not like the plot-promotion cares about their level either, so probably the base game doesn't enforce level requirements.

Something I don't notice until much later in playing: Eirika has +1 Constitution. All her other stats are the same as in the base game, though. 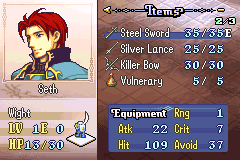 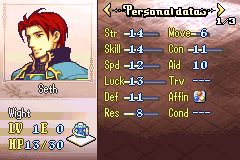 So, here's Seth's starting stats and weaponry. Notably, he's been given a Killer Bow to start with -Seth the Wight has A rank in Swords, Lances, and Bows! He's slower than his Paladin counterpart in ordinary reality, but that's okay, I never used Seth for his movement speed. I'm much more concerned that he's no longer a cavalry unit: a lot of my early game play involves using Seth to Rescue people out of bad situations, taking advantage of his Canto ability to get himself out of the way in the process.

For whatever reason, Wight Seth has +1 Skill over Paladin Seth. His other stats aside Move are all the same, so this is a curious change to me.

A point worth noting is that Seth's range of options here isn't representative of Wights in the unmodded game -there, they're either Sword/Lance or pure Bow, just like their weaker Bonewalker brethren.

In making this Let's Play, I also finally realized why the Wight's overland sprite has always bugged me: it has a shield, and yet in battle Wights are simply purple Bone Walkers. This is true of many of the "promoted" monsters -they have an at least slightly distinct overland sprite, but their battle graphics are just recolored. Now I'm wondering if the "promoted" monsters were originally intended to have their own unique graphics, and time and/or budget constraints led to the recolor approach in the released game. There's a number of bits of evidence that Sacred Stones was not fully polished before release, but noticing the Wight overland sprite having a shield is rather more concrete than anything else that's had me suspecting a rush job.

It's also only now, in writing this up, that I notice that Seth has 13 HP here. He had 5 after Valter hit him in the cutscene. Eh, whatever. It's interesting to have confirmation that Seth's HP here is scripted, and not actually carried over from the damage he took, but not terribly relevant. 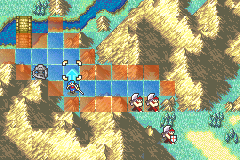 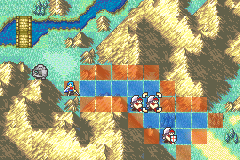 I check the range on the Fighters, and move Eirika up one space so only one Fighter can reach her. It's unlikely, but possible, for Eirika to take a hit from the first guy, kill him with a critical hit, and then take another hit from the second guy, killing her. I've even had the misfortune of having it happen on a run of the unmodded game. 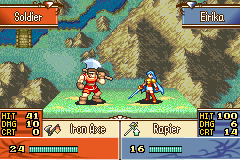 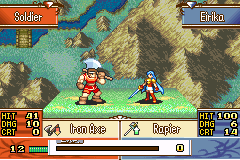 Please don't make me kill you. Can we come to a diplomatic solution instead?... no? sigh

Awww, the Dark Princess of Renais is still her usual self. That's a little disappointing. Regardless, the Fighter misses her, and she doubles him. One more round like this, and the Fighter will be dead. 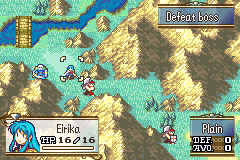 Huh. I thought I took more screenshots. Regardless, Eirika passes her turn and lets the Fighter attack her, killing himself on her without even landing a hit. The other Fighter, sensing that he can actually target Eirika, moves up, but is not in range to attack Eirika this turn.

You know, I trained in swordplay to feel less like a burden to my brother, not to ram a rapier into some poor man's guts. 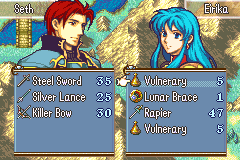 I abruptly remember that I prefer to pass off some of Seth's stuff to Eirika at this stage of the game, and give her his Vulnerary. I'd intended to give her his Steel Sword, as well, but then decided against it just in case the next mission involves lootables I'm not expecting. Since I don't have the Convoy at this stage of the game, looting an item while full would involve throwing stuff away. The Steel Sword is usually not going to help Eirika anyway, so no big loss. 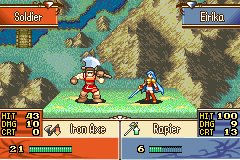 The second Fighter draws blood, but he's also considerably more fragile than his friend for whatever reason. As such, when my turn rolls around I have Eirika finish him off -she hit him twice during his attack for all but 3 HP, and she can't miss, so it's less risky than having her drink a Vulnerary. 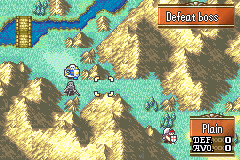 Leaving things looking like this. (This is also where I remember to change the interface settings, which includes menu background colors) 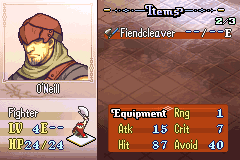 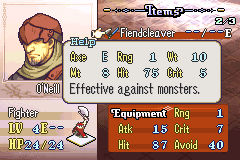 It's at this point that it finally occurs to me to actually check if the boss is any different from the unmodded game, and to my surprise O'Neill has a weapon never seen in the unmodded game!

Fiendcleaver is actually a normal part of code of Sacred Stones, but no shop will sell it and no foe will drop it. (Or use it against you at all) Presumably "regular weapons that beat monsters" was a feature that was decided against after it was actually coded. These stats are, in fact, the unmodified stats-

A quick check of Serenes Forest confirms that, while the other stats are correct, Fiendcleaver is not coded with unlimited uses normally. So that's a change the hack has made, above and beyond making it available at all. That's interesting. Not very relevant here, but interesting.

Regardless, this would be a nasty surprise to a player who decided to have Seth clean out the enemies without bothering to check what gear they were carrying. 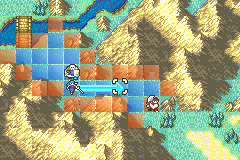 To my surprise, O'Neill moves to a Forest tile, rather than moving his full distance. I move Eirika to the indicated tile and have her heal with a Vulnerary, half-expecting O'Neill to sit there and wait for her. 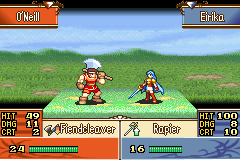 Thankfully, O'Neill decides to leave the relative safety of his forest tile and initiate battle with Eirika. Not-so-thankfully, he has a crit chance. A small one, but it's there, which just strikes me as poor design given that having Seth attack O'Neill is also risky. 24 effective Might backed by O'Neill's 7 Strength is 31 damage. Even if you fully heal Seth and have him break out his Steel Sword for weapon triangle advantage to lower O'Neill's damage by 1 point, you're risking instant death for Seth in melee combat!

I suppose the intention might be that you're expected to kill O'Neill with the Killer Bow, but I'd rather feed Eirika the experience. Seth would basically be wasting it at this stage of the game, and anyway the mission is so short re-doing it wouldn't be a big deal if Eirika died. 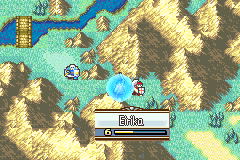 Unfortunately, Eirika eats a hit, and worse yet, she's not fast enough to double him, otherwise I'd simply have her attack again and finish the mission. Instead I have her use another charge of her Vulnerary and let O'Neill initiate the fight.

My attempts to screenshot what happens go awry -unfortunately, when hitting an enemy there's a single frame where the entire screen is white, and I manage to catch it- but O'Neill attacks and doesn't get a critical hit. It's all over from there. 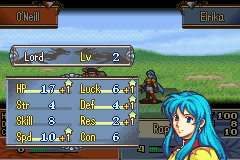 Eirika levels up, and it's quite the nice level. I would've liked to get Strength -it makes a big difference in these early missions for Eirika to get a point of Strength or two on her first levels- but this is still a good level.

And that's the first level done, aside from some dialogue.

Why couldn't war be an elegant and happy thing?

Don't be absurd, Seth. That I don't wax poetic about the mercenary life like my brother doesn't mean I have a mislike for it. I just wish war didn't involve so much blood and tears.

You're dead, stop talking. Grado doesn't deal in necromancy, last I checked. Speaking of, I feel like continuing my piggyback ride, skeleton Seth.