I first played The Legend of Zelda: Link's Awakening when I was about 11 years old, and before I'd so much as read the manual or booted the game for the first time I was basically assuming, between the name and the surreal image of an enormous egg on a mountaintop, that the game's premise was rooted in a dreamscape.

Then I read the manual, and it just reinforced this interpretation: dungeon bosses are named "Nightmares" in Link's Awakening, where other Zelda games just call them bosses. There's not exactly a lot of subtlety here, and in playing the game literally every Nightmare you defeat drops "hints" (Several of them are all but explicitly saying this) that the island is a dream and so too is everything in it except the player character.

So I spent more than a decade assuming that literally everyone who played the game understood from the beginning, or at least by the time of the second or third dungeon, that the game's events took place in a dream.

Imagine my surprise when I found many fond -or not so fond- reminiscences of the game from other people I have run across start from the assumption that this is an unexpected, shocking twist they had in no way anticipated prior to the game explicitly spelling it out just before the sixth dungeon...

... or even a revelation they only believed when the game ended, quite bluntly, with the Wind Fish awakening and the island vanishing.

Even more surprising to me was how many people resented the idea that Link's Awakening takes place within a dream, and most especially why.

They felt it amounted to saying the entire game you just played didn't actually happen.

It never occurred to me to interpret it that way. I saw the way the game uses the dream concept, and appreciated the cleverness. I saw how the game took it as a given that this environment was a real, physical thing, and found the dichotomy interesting -it's all in someone's head, and yet it's a physical reality, simultaneously. It was and remains one of my favorite aspects of the game.

It never occurred to me that the game taking place within a dream meant "it didn't happen", because that's not how the game uses the concept.

Here's some of the ways it does use it.

Isolation
The player is not going to be rescued nor will they escape. Since the island is a dream, a rescue team probably can't even find the player, let alone retrieve them. No message in a bottle will reach anyone else. No one will see smoke if a fire is started other than the island inhabitants. Building a raft won't get you off the island. After all, you're not actually in conventional reality -you're in some god-thing's dream, and there's no reason to believe anything can make it off the island, particularly given all the dialogue from the locals establishing that, as far as they know, it's not possible to leave.

This directly explains why the player character must solve the challenges of Koholint Island. There isn't any other option. If the player was washed up on some weird but ultimately normal enough island, then it becomes a bit questionable that the player isn't allowed to try to escape the island, call for help, or simply settle down and survive off the land's bounty indefinitely. Why should the player run around, heroically solving the problems of these strangers and chasing down the main quest?

This is especially true when you consider that the game is supposed to be a sequel to A Link to the Past: two different characters in that game have telepathic abilities, one of whom contacts you after you've been dumped in another dimension, apparently immediately aware of your circumstances and able to talk to you like you're in the same room as him. It's all too easy to imagine one of Link's allies simply telepathically checking up on Link, finding out he's shipwrecked, and sending a ship to rescue him, if he'd simply ended up washed up on a regular island.

The only way to escape the island is to end the dream, though, so the quest must be completed to achieve your own ends. The player doing what the game wants is a natural extension of circumstance, rather than a product of the arbitrary forces known as 'the development team'. Find the Nightmares, kill them, take their magical instruments to the Wind Fish's egg, and awaken it. What else are you supposed to do to escape a dream, especially one operating on dream logic?

Explaining why the player is doing what the game wants them to do is easy to get wrong in any game. It's all too easy to develop a complex, interesting solution that makes for challenging and enjoyable gameplay, while neglecting to justify the player's inability to pursue some other, simpler solution. If Link's Awakening took place on an island whose only quirks were being covered in weird magical stuff (Just like every other part of the world in every Zelda game ever), it would be very difficult to accept that Link doesn't simply retrieve his personal possessions, build a new raft, and continue his journey back to Hyrule.

Apathetic Islanders
Speaking of having to do everything yourself... the inhabitants of Koholint Island are largely uninterested in helping the player directly. Civilians are usually fairly useless to the player in Zelda games, but in most cases they are scared of the villain or far too busy to help the player without damaging their lives -the folks in Link's Awakening don't seem to have anything better to do. This would be obnoxious and make the player resent these characters... except it's a dreamscape. You just don't hold dream-people to the same standards.

This being, again, important for keeping most of the workload on the player. It's not much of a game if the challenges solve themselves for you. While this particular utility of the dream concept is more of an incidental benefit than anything else, it's still worth commentary.

Convenient Dungeons
The dungeons of the game have no explanation, and they don't need one. Other Zelda games have to justify the presence of a vast underground fortress filled with monsters and puzzles, holding a single interesting item that conveniently is very useful for getting through the dungeon itself, and culminates in a boss monster guarding a plot coupon. This is actually a rather daunting challenge to pull off once, let alone the 8+ times most Zelda games need to do, and if I'm brutally honest most Zelda games have at least one dungeon that gets by on player goodwill more than actual plausibility.

Link's Awakening waves off these concerns effortlessly. It's a dream. Yeah, it more-or-less explains the bosses (Nightmares of the Wind Fish that don't want it to wake up because they would stop existing) and plot coupons (magic instruments for opening the Wind Fish's Egg, so you can reach the Wind Fish and wake it up, which one can assume the Nightmares are guarding to prevent exactly that scenario), but the actual dungeons are just sort of there, with no effort to justify their existence, location, or theme. What's up with Tail Cavern?

It's a dream, it doesn't have to make that kind of sense.

It makes it easy to construct something that's good gameplay without worrying too much about plot problems.

Strangely Convenient Allies
A staple of fantasy is the wise men, talking animals, and just plain inexplicable Voices From Nowhere that all conveniently want to help the protagonist defeat the villain because... um...

... well, a lot of the time, they don't have an actual reason given or implied. A lot of people are willing to wave off these flaws as a fantasy staple, a conceit of the genre you shouldn't question, but not everyone is, and it's easy for a story to misuse the concept badly enough that even the most generous soul can't suspend their disbelief successfully.

The talking owl that provides some guidance over the course of the game? Sure, why not. Dream.

Strangeness, generally
The game has Goombas, Piranha Plants, Cheep-Cheeps, a Chain Chomp, and yet more Mario references. A Mr. Wright (of Simcity for the SNES) reference exists ("Mr. Write"), a character has a picture of Princess Peach without explanation, one character is a reference to a game never officially localized in English (There's a fan translation, for those curious), there's a singing frog that strongly resembles Wart of Super Mario Bros 2... if you talk to a particular man early in the game, he let's you know he'll be lost in the mountains later, so keep an eye out for him! The sister village to the starting town is filled with talking bipedal animals, which no one thinks is strange. There's a guy who provides hints to the player... but only by calling him via telephone, of which there's houses with no purpose but to contain a single phone scattered all across the island... and since when does any part of the Zelda timeline even have telephones?

At one point you have to lay down to sleep so you can pull a magical item from out of the dream you have when you sleep!

And the player accepts it all readily enough because it's a dream. If the Wind Fish dreams of Goombas... well, why not? It could be weirder. It's not like it suggests that Mario and Zelda take place in a shared universe -it only suggests the Wind Fish has a weird mind.

The Clincher
Link's Awakening has a minor (?) secret. If you complete the game without ever saving a death then something special happens.

There's a girl named Marin. The plot leads you to interact with her a few times over the course of the game, with one particular sequence dedicated to her talking about what she wants out of life. We learn she desperately wants off of the island. She feels envious of the seagulls, who can go wherever they want and sing without a care, instead of being trapped on a small island, unable to explore the larger world. She, in fact, wishes she were a seagull, so she could fly wherever and sing for anyone.

When you complete the game, the entire island vanishes. The only things that remain are Link, the remains of his raft -the one destroyed at the beginning of the game!- and flying overhead is the Wind Fish.

... unless you never died. In that case, we see that Marin lives on as a seagull. In the original version of the game, she flies in front of "The End" during the credits as seagull cries play (Which is sufficiently ambiguous a player could be forgiven for thinking the game is implying she's gone to heaven ie died), while in the DX (color) version of the game her human image flashes over the screen briefly while the screen is trained on seagulls and we can hear their cries... and we can hear Marin singing. 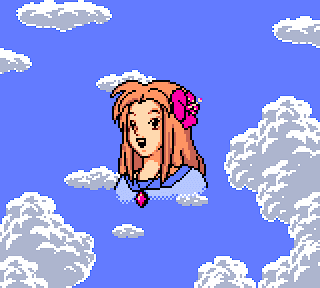 Either way, something from the dream survives past the dream's ending.