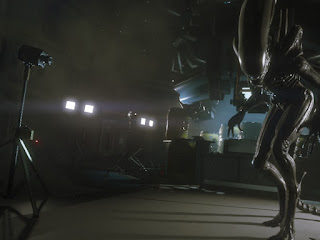 If I focus on what Alien: Isolation tried to be, it's an excellent game. To the best of my awareness it's the first video game to try to create stealth gameplay in which the player is actively being hunted: typically stealth gameplay relies on fairly passive enemies, with predictable patrol routes or outright idling or rotating in place, where the challenge is centered around identifying where the holes in security are and moving with good timing to exploit them. Alien: Isolation has that too with the non-Alien threats, but the center of the gameplay is the Alien itself and it really is carefully modeled as a being trying to hunt you. As one of the better examples, if it spots you running for a room and loses track of you on the way, it will search possible hiding spots in that room it would normally ignore and so probably find you if you're poorly-hidden, where typically in stealth games enemies have no concept of searching hiding places at all, no matter how obvious or clearly-defined they might be. This right there does a lot to sell the idea that it's intelligent and actually looking for you.

By a similar token, hearkening back to the Alien being a monster beyond mere human means to kill is a great idea. Typically Alien games make the Aliens cannon fodder opponents, and where the Aliens movie had the Aliens sneaky and canny, such as the memorable they're in the room scene, allowing the movie to maintain a horror atmosphere even while the marines were able to mow down groups of Aliens with their weapons... typical Aliens games have them pretty brain-dead cannon fodder. Which, fair enough, making AI that's convincingly intelligent is extremely difficult, but that doesn't really change the point that having a game where the Alien is invincible-by-default is an excellent idea, and indeed it's a much more game design-friendly way of recapturing the horror of the movies than trying to make something smart.

Which, hey, they tried to do that too, and did a decent job overall.

If I focus on what Alien: Isolation is... it's a lot harder to be enthused about it.

Part of the problem right away is how the game distributes its focus. Avoiding being eaten by an Alien is by far the strongest part of the game, yet the game takes around an hour for you to even get a cinematic with an Alien in it, assuming you know exactly what you're doing and where to go and don't, for example, spend a while reading logs in the station. Then it takes something like twenty more minutes for the Alien to join you in actual gameplay.

Certainly, the game needs to give the player time to get used to the core gameplay and all, but this is overkill.

Worse, it's not a lone exception; there's the time you control another character in a flashback, with zero danger whatsoever throughout that sequence, with said sequence being in the middle of you visiting Plot-Important Humans who thus aren't allowed to die and in turn thus the Alien isn't allowed to spawn in during the non-flashback parts. There's the time your character thinks they've solved the Alien issue, which leads to another hour or so of you having zero possibility of running into an Alien. There's the repeated cases of you putting on a space suit and going out into space, with zero danger of any kind, where said sequences are always slow. There's the myriad plot beats where for some reason or another the game is obviously not going to let an Alien drop in because that would interrupt whatever plot thing is currently going on. There's the lengthy endgame, which increasingly guts the dynamic gameplay of being hunted in favor of script-scares that are completely pointless or actively counterproductive to inducing fear. And, of course, there's the dozens of map sections that offer no places for you to hide and no method for an Alien to arrive by, making it obvious you're in no danger from an Alien.

In total, you spend shockingly little time being hunted by the Alien. The Alien is the core of what makes the gameplay work and so this is bad right there, but what makes it particularly frustrating is that the game sells itself first and foremost on the basis of the Alien hunting you. I spent the first two hours of playing the game feeling basically lied to, and looking back from the perspective of having completed it that feeling hasn't exactly gone away. (Because of myriad problems with the game, it took me that long to even reach the cinematic with the Alien showing up on my first time through)

Then there's the dozens of dubious or Just Plain Wrong game design decisions littered throughout, the fact that the plot is thin at best and dumb nonsense at worst, and the lethal technical problems that have not and probably never will be fixed. One section of the game is long-known to be able to enter an unwinnable state, which inexplicably can be bypassed by turning down your graphical settings and resolution. I actually had this particular problem occur again in a later area, to boot!

The coding-level design seems pretty suspect as well. I'm not on a gaming rig so I was going in expecting to have problems, but the nature of the problems is just bizarre and nonsensical. First of all is how the game handles lag: a normal, sanely-made game will react to lag in one of two basic ways. The first scenario, very common in multiplayer games for obvious reasons, is to just skip frames or the like and attempt to move the game forward at a constant speed. The second scenario is to slow everything down, but otherwise function normally, which admittedly usually results in sound desynchs but whatever.

At first glance, Alien: Isolation has gone for option the second. On further inspection, it turns out that the slowdown is applied extremely unevenly. Sometimes the effects of this are merely laughable, such as an incident early on where you listen to two people talking from inside a vent, and what's supposed to happen afterward is they wander off out of your sight and then the engine gets rid of them; with the lag, they walk partway to their intended vanish point before abruptly popping out of existence. Oh well, that's funny but no big deal.

In other areas, the effects are much more problematic. Also early in the game is a sequence where someone crawls into a vent ahead of you, and you're supposed to go in after them: with lag, the bit of code saying 'you can't go in' times out before he's actually completely inside the vent, and the result is it's possible to climb in through him and end up ahead of him, messing with scripting.

More generally?... for some bizarre reason the player character is slowed down less than most everything else. This means lag doesn't just give you more time to react, it makes the game easier mechanically, making it trivial in most situations to sneak around the Alien because even when crouched you're around as fast as the Alien's normal patrol speed.

Now, normally I'd not bother to mention all this, in spite of how comedically bad it is, because ultimately this isn't a game targeted at people trying to play on toasters. I don't have a lot of respect for the whole approach of 'obviously all customers are willing to shell out big bucks for a Gaming PC in addition to paying for the game itself', to be entirely honest, but in the context of such a decision it's perfectly reasonable that the game's Q&A clearly didn't prioritize making it function smoothly on a toaster. At most I might've mentioned it in passing in regard to the fact that turning the graphical settings down even lower than they were automatically set to modestly sped up the game with absolutely no change in the actual visuals, which is just inane. Or maybe I'd have mentioned the comedy point that the lag issues warping gameplay are sufficiently widely-known that people deliberately induce lag for speedrunning tricks.

The problem is, the glitch that prevents the game from being completed being bypassed by turning the resolution down to the lowest setting caused me to discover the utterly bizarre fact that turning my resolution to the lowest setting magically causes the game to run perfectly smoothly. (I'm actually making a second run at the game to see what its difficulty curve, among other things, looks like when it's running as intended, as well as gather screenshots for these posts) Even more baffling, the only engine-level graphical difference I've observed is that normally pulling out the Motion Tracker blurs either everything aside the Motion Tracker or just the Motion Tracker, but at the lowest resolution this effect goes away.

This strongly implies that there are some very, very wasteful processes going on that have absolutely no effect 99% of the time. You know, other than wasting processing power and potentially lagging the game. Worse, it's something the system won't directly let you turn off, even though it's clearly a massive resource sink for little or no benefit: exactly the sort of effect you should let the player disable.

A related issue to the preceding is the godawful sound tuning, and the complete inability to correct it. You can manipulate music volume, and everything else volume. That's it. The industry standard in almost any game with voice acting of letting you modify voice volume separately from everything else? Not present. Which is a dire oversight given that one of the most widespread, unavoidable sound tuning problems is that people talking are often extremely difficult to hear, often even when you're almost right on top of them, but if you turn up the volume so they're more consistently audible you're going to be in actual pain anytime any of the extremely noisy things bursts in.

Perhaps the most frustrating thing about Alien: Isolation isn't so much how it's riddled with problems is how the wider gaming world routinely likes to say things like that it's 'the Aliens game we deserve'. I can't even blame this on the usual problem of professional game reviewers rarely actually finishing the game before releasing their praise or condemnation, because only a handful of Alien: Isolation's problems take particularly long to show up. Most of them are there, and obviously so, from the word go, and by contrast the things it does well take a while for it to get around to them. I'd much sooner expect the reverse, of the game having gotten much more negative press than it merited.

Regardless, this is an overview or introduction post. Next Friday, I'll be getting more into the details of those bad game design decisions.