Warriors of the North: Introduction 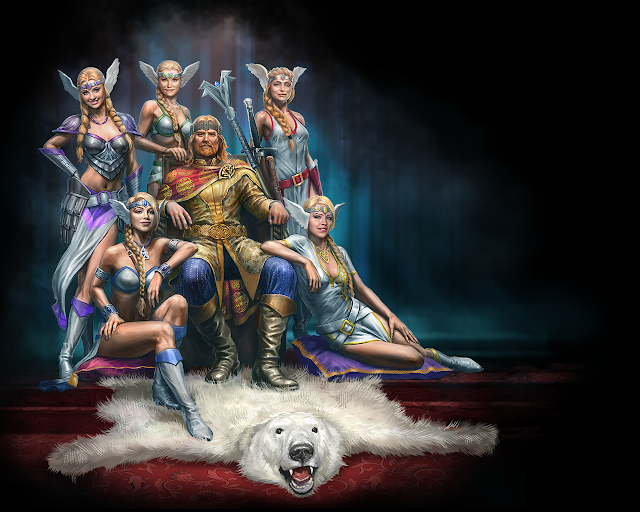 One of the most striking things from right off the bat about Warriors of the North: the game runs way more smoothly. The Legend and Armored Princess always run a bit slow, even if your system can cope with them just fine, and eventually you just get used to it and think of it as a stylistic choice or something, and then you go to Warriors of the North and it all runs way faster and pretty much never, ever gets jerky when rotating the camera or doing any of the other things that could cause slowdown.

In exchange Warriors of the North is the crashiest of the series: it doesn't actually crash all that often, but more so than the other games in the series you should be saving regularly in Warriors of the North. It would really suck to have an enjoyable hour of play vanish into the ether because you didn't save anywhere in there -though the game autosaves every time you perform Fast Travel, so you probably won't lose that much playtime to a crash, so long as you remember that autosaves are a thing.

Still, it's an incredible improvement, and I assume the crashing is a byproduct of whatever code refactoring was done to get the game running so much better. Armored Princess is probably the best/least flawed entry in the series as far as raw game design goes, but Warriors of the North's sheer speed and smoothness advantage is so significant I'd argue it's much more fun to actually play. Especially since a lot of the design fails aren't actually that negative an impact on the game -the Viking class has weird design flaws, but they're not horribly inferior to the other two classes or struggling to keep up with your enemies in the way that The Legend's Warrior has difficulties keeping up.

That said, some of its game design flaws are fairly serious: I alluded a few times to how Armored Princess' early game is so tightly tuned you don't really have wiggle room, which can be problematic when the RNG decides to be unfriendly about placement of key Heroes and the like. Warriors of the North is a bit less tight in a more general sense, but the early-game difficulty curve can be fairly infuriating as you twice will be faced with fairly difficult encounters it's not really possible to level far enough to be able to take down readily because access to other islands is locked behind them. The first time isn't too bad as it's just a regular fight against a Hero, but the second one is insane as it places you up against the most godawful Boss in the entire series, and as a Boss it just plain doesn't get worn down, meaning you can easily start the fight looking like things are going to work out okay and by the end of it you're buried in spiders, your forces are nearly wiped, and they're doing maybe fifty points of damage at a time to an enemy that still has 2000 Health remaining.

This is where I'm going to break from my usual rule of keeping overly-specific advice out of my posts and say: first of all, ideally you play the Ice and Fire DLC, for a variety of benefits it brings to the table. One of these is letting you buy Sea Charts for the Islands of Freedom from Gregory the Smuggler on Istering (After you complete his Quest to get mining tools, specifically), giving you access to banners and so on, not to mention a bunch of fights you're not really intended to fight just yet but which are still less horrible to fight than the Giant Undead Spider is: buying these Sea Charts will go a long way to making it less infuriating to deal with the Giant Undead Spider, as the Isles of Freedom have lots of goodies and a bunch of fights tuned to be reasonable to fight at the stage of the game you're likely to access them at. Another big one is the Ice and Fire DLC will give you access to Merlassar way earlier if you make sure to talk to the pirate captain Simon Danziker on Istering and ask him about the Ice Gardens, and Merlassar will eventually let you reach the Ice Gardens, again making it easier to boost yourself up to be better able to take on the Giant Undead Spider.
If you're not playing Ice and Fire, uh, good luck? Make sure you avoid casualties in as many fights as feasible, so you'll have Grand Strategian's +1000 Leadership before you fight the Giant Undead Spider? Consider playing a difficulty lower than whatever you found comfortable in Armored Princess, because the Giant Undead Spider is a brick wall? Or maybe just... don't play the base game if you've got Ice and Fire. Ice and Fire has flaws, but being able to better prepare for the Giant Undead Spider is so huge I have difficulty arguing those flaws aren't worth it.

Even once you're past the Giant Undead Spider, the game still has more design flaws than Armored Princess, they're just a lot less serious. You fight Undead a lot in the game, and it's easy to get bored and frustrated by fighting the same set of enemies repeatedly (Especially because formations are even more repetitive than you might expect from being mono-Undead, such as the vast majority of battlegroups having exactly one Skeleton Archer or Necromancer stack), especially since Undead have an array of immunities and whatnot that render certain cool Talents useless and/or severely limit the utility of specific units. (Again, Ice and Fire helps ease this repetition) Quest design is more prone to sending you running on relatively pointless errands where you have to run back and forth between two people three times without ever being in danger or anything that would justify the trip on a design level. You get a lot more Quests that just sort of start up with no clear explanation of how you actually solve them. The game has two Items -Ink and Old Shoes- it will let you smash/sell/gift to your Valkyries, but you shouldn't do any of these to them because the first one is necessary to complete a Quest and the second one is necessary to access an entire (small) map area; if you have the Old Shoes in your inventory when talking with Gregory the Smuggler, you can ask him if he'll let you use his safe haven, letting you into an underground map section with a few Quests (And the tools necessary to complete a Quest that you initiate from outside the haven), fights, and collectibles to pick up. The latter point in particular has no hints whatsoever: even when you have the Old Shoes while talking to Gregory the game gives no hint that having the Old Shoes has any relevancy.

The game is also bad about springing fairly obnoxious surprises on you. There's a Hero fight past the Giant Undead Spider that, upon completion, kicks you off to Greenwort and takes away all your surviving troops permanently. Oh, one of your stacks was a rare unit type you were hoarding preciously, intending to use as long as you reasonably could? Gone forever. One castle in the Western Isles of Freedom locks you into doing a fight you might not be able to beat at all simply for trying to enter the castle. The Greenwort castle eventually gets permanently locked off, and while you can actually see it coming in this case in a general sense the game doesn't clearly signal when it's going to happen; if you care about anything the castle -or the adjacent buildings!- is selling, make sure you buy them as quickly as possible, and don't drop off troops at that castle unless you're fine with losing them. Even less obvious is that the entirety of Arlania is replaced when you hit this point, replacing existing shops and another castle, so one of the obvious places to dump off your troops while in Darion is also going to get them lost forever! Warriors of the North has the single worst Medal in the entire series...

... but if you're willing to overlook these flaws, if you're prepared for the traps the game has laid -accidentally or intentionally- the game is quick, it's fun, it's got the best racial balance/distinctiveness in the series, it finally gets the classes balanced conceptually (Even if there's some flaws in the execution), it's got an overhauled Companion system that just works better (It's not my favorite in the series because Dark Side takes its lessons and improves upon them), and aside a couple of flaws its approach to Rage is even better than Armored Princess' approach.

That's a long-winded way of saying Warriors of the North has the best battle system in the series, and it's mostly just out-of-battle choices that can be infuriating. (Even the Giant Undead Spider falls under this; it's less that it's insanely overpowered and more the decision to make it a mandatory early-game Boss fight that's the problem) It's actually my personal favorite game, even though I understand why a lot of people feel Armored Princess is superior.

It's also got a number of cool new ideas; one of my favorite touches is, in what could be taken as a nod to the Heroes of Might and Magic series, how in Warriors of the North Heroes are actually present on the battlefield! Instead of enemy Hero graphics being something you tend to see briefly before you kick off the fight with them, you get a chance to actually look at them in battle, not to mention it's an opportunity to give the player character more of a personality through body language and so on.

Put another way, if you're going to play one game in the series, I'd say Armored Princess is better for seeing the full idea of what the series is about, but Warriors of the North is better if you just want to have fun. (... and don't mind having to keep in mind the trap stuff)

Next time, we kick off talking about Warriors of the North with the new faction: the Vikings. Though if you're interested in some technical details, first I'll be delving a bit into Ice and Fire's experience system for units.
Labels: King's Bounty Warriors of the North